William Long was out on the road recently to assess frost damage across several regions resulting from temperatures of as low as -6ºC in late April. The most serious effects were seen in Bierzo, areas of Galicia, Castilla y Leon – including Rueda and Ribera del Duero – and the Rioja Alta and Alavesa, as the frost came after an unseasonably warm spring caused buds to break two or three weeks ahead of the usual schedule. It is these young shoots that are particularly susceptible to frost damage. 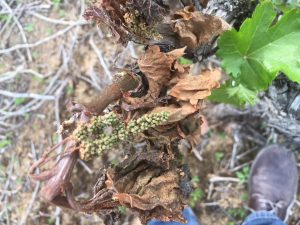 Frost damage to vines in Bierzo

William commented, “Seeing the results in Bierzo it is obvious that it is the vines in the lowest areas where the cold air sank to were the most affected, where as some of the parcels on higher slopes escaped the worst of the freeze. The worst-hit areas were Valtuille, Cacabelos and Camponaraya, with up to 80% of the crop spoilt.”

Long Wines’ winemaker Fernando Mora commented on other areas in Spain: “From what I have seen, the worst damage has been in Rioja Alta, Galicia and Bierzo. In Aragón, where I am based, Calatayud was worst hit, with 60% affected, but the Campo de Borja escaped relatively unscathed with just a few parcels afflicted.”

The next few weeks will be crucial in determining the final effects on the 2017 harvest as some vines should be able to regenerate some regrowth although this will depend on the rainfall, as many areas were already close to drought conditions after a dry winter, leaving the vines with very few resources to initiate a second budding. There is also no certainty that these shoots will produce fruit, and bunches that do form will take longer to ripen, guaranteeing a very heterogeneous harvest. It is also expected that yields will be down as vines that do recover will probably only go on to produce 1 or 2 bunches each, instead of the habitual 6-8. Current estimates are of a 50-60% reduction in yields in Bierzo.

We will continue to keep a close eye on the situation and update our customers on any supply issues that could result from the difficult weather conditions.