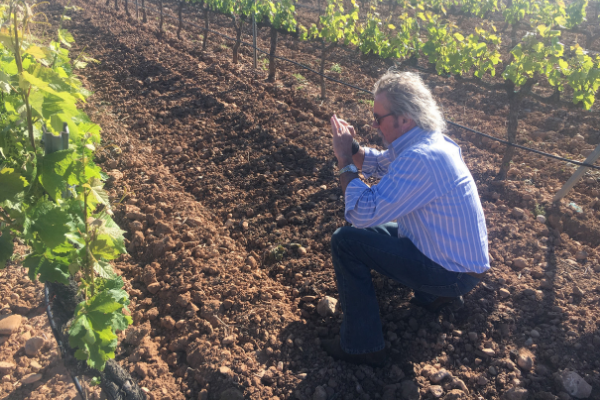 Fletch Henderson – Ever diving for pearls

If there is one thing you could never say about Long Wines’ US trade representative Fletch Henderson’s life is that it has been boring. It started out with stint in the US army before training as a comercial diver; you could perhaps draw parallels between his previous life diving for pearls, or rather spiny lobsters, and his current role pairing the best Spanish wines with their ideal customers in the USA.

He touched upon various other trades such as carpentry and plumbing before catching the wine bug in the mid 1990s and assisting the winemaker at three wineries across Virginia for the 1999 and 2000 vintages. His first full-time position in the industry was a sales representative of The Country Vintner in 2001. He then invested in a new Virginia winery, The Winery at La Grange, where he was then hired by the investor’s group as the in-house general construction manager for the restoration of the dilapidated historic manor house (circa 1790) and building of the winery facility. He was honoured by having the estate’s Chardonnay – a wine that he helped style – named after him. “Fletcher’s Chardonnay” was first made in 2002 and continued at three wineries right through until the 2017 vintage.

He went on to become winemaker at La Grange and Goombas Wineries, as well as working in sales roles at importers that included Country Vintner, J.W. Sieg Wines and W.H. Imports, before taking on his current role for Long Wines in October 2018. He is also a distributor for Virginia winery Fabbioli Cellars and Vice President on the Board of Directors of the Atlantic Seaboard Wine Association.

It is not the first time that he has represented Spanish wines in the USA, having also worked along Aurelio Cabestrero of Grapes of Spain, so we asked him about his links to the country:

“I liked Spain when I was growing up, even though my family background is Scottish and Welsh. My first trip to Spain was a solo drive around in 1996 with the main aim of absorbing the vibes of the walled medieval town of Albarracin, north of Teruel. I fell in love with the country, food, culture and more so with the wines.”

Fletch is obviously not shy of physical work, so we asked him about making the switch from making to selling wine:

“I’ve always liked sales from the one on one, face to face, non-retail perspective. When I am showing wines to potential customers I always learn more about the wines from the buyers’ comments and evaluation. It is another perspective. In the wine business you never cease learning unless you turn yourself off.

Last October, I decided to step back from the physical work of winemaking, and hours, to be more part-time and I emailed a select group of contacts including William, with whom I’d become friends after meeting initially on a buying trip in 2002. I let them know I was looking for something in wine that is interesting and part time only. William replied that we should talk about me doing something with Long Wines in the U.S. And here I am enjoying learning about this side of the business and working with William and Spanish wines again. I’m lovin’ it!”

Fletch sees great opportunities for Long Wines in the US market:

“Long Wines to me is a rare concept; a winemaking company making wines in 30+ D.O.s. Having known William all these years, I’ve seen the transition it has made into making its own wines across Spain and feel I’ve had a role in its evolution. I like the flexibility of the role and the fact that it brings into play the many contacts and friends that I have accrued in the wine industry over the years.

In my opinion, we show clients the diversity of Spain and its wines. Our wines are exclusive, solid and well-made with typicity and are well priced in each category. Long Wines is transparent and diverse. We have a diligent customer service philosophy. The «How We Work» document is an example.”

When asked to name his favourite wine in the range, Fletch struggled to limit himself to just one:

“I like all of the wines in the portfolio to varying degrees. There are no stinkers in the herd. RAR, El Bos, De Pró, Puerto del Monte, Finca Mónica, Altos de Oliva are a few of the highlights for me. It depends on the food and my mood. Of the wines I drink probably 70% are whites. I like the quality, typicity and value of the Long Wines range.”

With so much going on, it’s not surprising that Fletch doesn’t get much time to relax:

“I always seem to be busy. That’s why I can’t simply «retire» to watch TV soap operas all day. I do enjoy drinking wine and puffing on a cigar (only one cigar a day though) and watching movies on TV with my wife Adale, who manages the front of house at a winery. And, believe it or not, we love wine so much that we often visit local wineries on our common days off!”