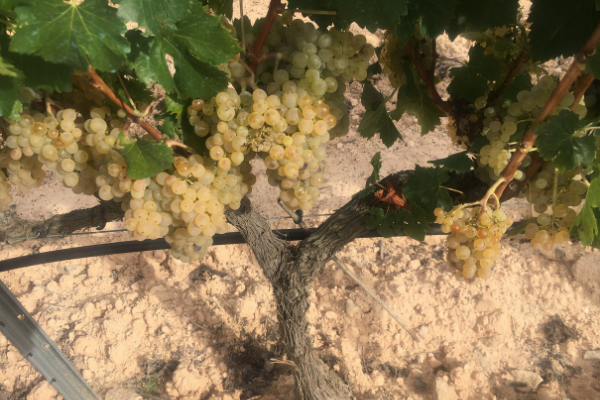 As usual, harvest kicked off in Spain this August, with areas of southern Spain, white and sparkling wine areas such as DO Rueda and DO Cava the first to be picked.

In terms of the weather, the winter storm Filomena, which caused record-breaking snowfall over much of Spain in January, helped build up water reserves, although it also caused some damage to younger vines.

Ignacio Marín, at our partner winery Gabardá in DO Cariñena, Aragón, mentioned the once-in-a-lifetime nature of the vintage:

«The winter was cold and dry until the historic 50cm snowfall in mid-January (Filomena). The spring started out with very little rainfall, until various storm-fronts came in with heavy rain. The summer was similar, very dry, but with storms until the end of the summer when torrential rainfall,  the likes of which had not seen since 1960 (up to 160 litres in a few hours).

With such disparate conditions, together with the fact that last year was an abundant vintage, this year’s harvest is smaller in comparison, with around 50% of the kilos harvested in 2020, but the taste characteristics are exceptional. The recently fermented and fermenting wines show greater concentration, better balance and greater aromatic intensity.»

Most of the rainfall across Castilla-y-León fell in May and at the start of June, later than in the previous year. As well as affecting fruit-set and increasing the risk of fungal diseases, some fell as hail, further reducing production. Spring hailstorms also affected some areas of Cuenca and Albacete.

Due to these factors, initial estimates are that the harvest will be 15% smaller than last year, with some areas, such as La Mancha expected to be 30% down on average.

Summer temperatures across much of Castilla-Leon were lower than average, ensuring a slow and gradual ripening process, creating complex aromas and flavours in the wine, and preserving acidity. Harvest is still ongoing in these cooler areas.

As we mentioned in our report on Cataluña, although drought reduced volumes in Penedès, in general this Mediterranean region has had a good vintage both in terms of quantity and quality, great news for growers and wineries after two very difficult vintages in both 2019 and 2020.

Eva Plazas from our DO Cava partner winery in Penedès echoed these reports:

«We have named the 2021 vintage as the “harvest of the varieties” since we have had a lot of climatic variability and each variety has acted in a different way! We suffered drought during the winter and spring with only 140l/m2 and the same amount fell in the month of September, luckily the plants had water reserves owing to the heavy rainfall in 2020. There were two short heatwaves from the 14-15 June and another on 23-24 July.  The first week of August was very cool with thermal contrasts between day and night that was perfect for ensuring the balanced ripening of the grapes.

The health of the grapes, the aromatic quality of the wines and the balance with acidity have been excellent.

We started harvesting on 12 August with the Chardonnay and we finished on 1 October with the Parellada.  The quantity harvested was higher than in 2020, when we suffered from problems with mildew.»

We will issue a further vintage report in a few weeks when we have further details from our partner wineries and the D.O.s with details of the size and quality of the grapes that are still arriving in the wineries at present.