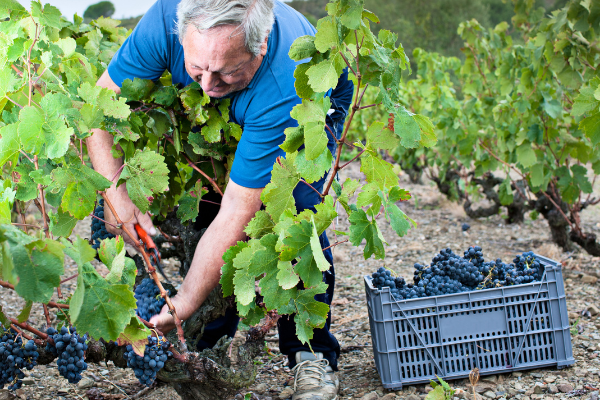 With international travel still difficult we’ve been travelling round Spain and keeping our ears to the ground to bring you the latest on this year’s vintage, here it is:

The final overall volume of between 39 and 40 million hectolitres (hl), down 15 % compared to 2020, in a year of very low harvests in France and Italy too, means, we are afraid, that prices are expected to continue to rise across the EU.

Here in Spain, we had a dramatic start to the year with storm Filomena leaving heavy snowfall over much of central and northern Spain. This benefitted ground water levels but sadly also killed off some exposed vines. Some areas experienced temperatures below minus 20ºC, causing vascular damage and leading to very uneven bud burst.

Fortuitously, conditions throughout the rest of the growing cycle were optimal in many regions, with growers in Bierzo, Rioja and Cataluña in particular telling us about the exceptional quality of the grapes this year.

ARAGÓN – ONCE – IN – A LIFETIME CONDITIONS

Many vines at higher altitudes were damaged by the freezing winter temperatures, but the final balance of the vintage is good, with the wines we’ve tasted so far being fresh and appealing.

Ignacio Marín, at our partner winery Gabardá in DO Cariñena, Aragón, where we produce Chispas Apasionante mentioned the once-in-a-lifetime nature of the vintage:

«The winter was cold and dry until the historic 50cm snowfall in mid-January (Filomena). The spring started out with very little rainfall, until various storm-fronts came in with heavy rain. The summer was similar, very dry, but with storms until the end of the summer when torrential rainfall, the likes of which had not seen since 1960 (up to 160 litres in a few hours).

With such disparate conditions, together with the fact that last year was an abundant vintage, this year’s harvest is smaller in comparison, with around 50% of the kilos harvested in 2020, but the taste characteristics are exceptional. The recently fermented and fermenting wines show greater concentration, better balance and greater aromatic intensity.»

After two ample vintages, 2021 was smaller due to a full gamut of adverse weather conditions across this vast region, from spring hailstorms in some areas of Cuenca and Albacete, to an extreme heat wave of above 45ºC in August in the Ciudad Real area, followed by heavy storms in September.

The result of all this: the harvest is estimated to total around 22.5 million hl, around 20% less than last year.

Here we saw most of the rain falling in May and early June, later than in the previous year. As well as affecting fruit-set and increasing the risk of fungal diseases, some fell as hail, further reducing production. Summer temperatures across much of Castilla-Leon were actually lower than average meaning a nice slow ripening process, creating complex aromas and flavours in the wine, and at the same time preserving acidity.

In Bierzo, rainfall interrupted harvest and led to a somewhat Atlantic vintage with lower yields.

Ribera del Duero, where the suppliers of our award-winning Altos de Aranda brand are located, saw unstable weather, with frosts and storms as late as May and early June, leading to fungus in the vines and low yields. The summer was dry and then rain fell again in September. Cool nights helped retain acidity, although we hear that those who picked later saw excess alcohol in some plots. The final harvest was of 109 million kg, back to more average figures compared to 2020’s bumper crop of 123 million kg. The health and ripeness of the Tempranillo is looking really excellent.

In Toro, harvest took place before temperatures had lowered, but rain helped retain the balance between acidity and alcohol.

In Rueda, veraison was somewhat irregular and there was some powdery mildew, but rainfall in September helped the vines achieve full ripeness.

As we told you in our previous report on Cataluña, although drought reduced volumes in Penedès (rainfall down 50% on the average up to June), in general this Mediterranean region has had a good vintage both in terms of quantity and quality, great news for our growers and partner wineries after two very difficult vintages in both 2019 and 2020.

Eva Plazas from our DO Cava partner winery in Penedès that produces the Toca and La Escapada Cava brands for us echoed these reports:

“We have named the 2021 vintage as the “harvest of the varieties” since we have had a lot of climatic variability and each variety acted in a different way! We suffered drought during the winter and spring with only 140l/m2 and the same amount fell in the month of September, luckily the plants had water reserves owing to the heavy rainfall in 2020. There were two short heat waves from the 14-15 June and another on 23-24 July.  The first week of August was very cool with thermal contrasts between day and night that were perfect for ensuring the balanced ripening of the grapes.

The health of the grapes, the aromatic quality of the wines and the balance with acidity were excellent.

We started harvesting on 12 August with the Chardonnay and we finished on 1 October with the Parellada. The quantity harvested was higher than in 2020, when we suffered from problems with mildew.»

PRIORAT – THE BEST OF THE LAST THREE YEARS

After harvests that were down more than 30% on average in 2019 and 2020 due to heat and mildew respectively, this year growers could breathe a sigh of relief, as things returned to more normal levels. The snowfall during storm Filomena was actually very welcome here, helping to replenish underground water stores. The cooler summer temperatures led to high quality Garnacha grapes with fruit and freshness, although some of the younger Cariñena vines struggled, as they need heat to fully ripen.

GALICIA – VOLUMES UP ALONG WITH PRICES DUE TO INCREASED DEMAND

In Galicia, as usual, 65% of the harvest was concentrated in the DO Rías Baíxas. This DO, famed for its Albariños, harvested 44 million kg –  27% more than in 2020, which was a particularly small harvest. The leading winery group in the region said that they harvested from the 14th to the 27th September and that the quality was excellent. Interestingly, exports continue to rise from the region, with 12% increase between 2020 and 2021, which has pushed up the price of grapes by 25-35%.

In Valencia in Alicante, we saw heavy rain in winter, spring and harvest leaving some growers having to fight mildew but this was less of a problem than in 2020.

High temperatures across most of the area, particularly the southern parts of Jumilla, dehydrated some plants, but rain in September helped refresh the vines and Elena Pacheco of Viña Elena, said that older vines coped with the conditions and “managed to achieve a good balance.”

With a longer, and slightly more abundant harvest than 2020, things are very positive in this iconic region. It was a cooler year, with dry weather until September, when the weather was very changeable with large temperature changes and periods of rain. There were some hailstorms, but those who waited until October for harvesting were rewarded with sunny days and cold nights, with good polyphenols and colour extraction.

In Rioja Oriental, Gorka Extebarria, the winemaker behind our Finca Mónica Rioja said, “ Compared to the 2021, this year’s harvest was preceded by a summer that was cooler but quite dry. In early September, there were some storms that threatened the final quality of the grapes, but in the end the weather improved and the grapes were healthy, with those harvested in the second half of better quality than those harvested at the start, when patches of Botrytis made it necessary to pick certain parcels before they reached optimum maturity.

In general, the grapes reached phenolic ripeness at a lower level of potential alcohol, giving wines with good fruit and colour intensity but with lower alcohol levels than in a normal year. In general we can conclude that it is has been a very good vintage.”