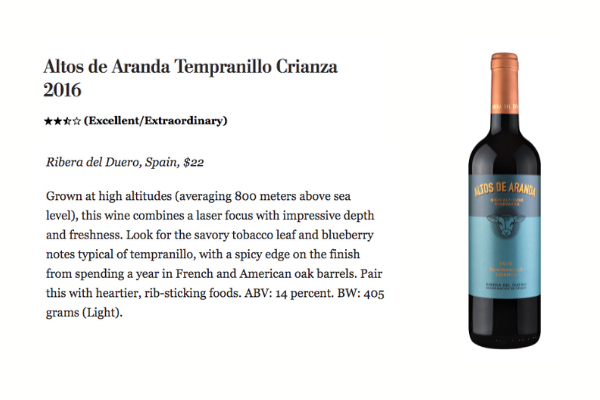 Wine critic for the Washington Post, Dave McIntyre, joins the growing list of fans of our Altos de Altos Crianza

Dave has been writing about wine since 1999, making him one of the longest-standing and most respected wine critics in the USA.

He is not alone in his praise for Altos de Aranda Crianza 2016. which was awarded a score of 91 points from James Suckling in 2021 as well as gold medals from Berliner Wein Trophy, Gilbert & Gaillard, and America Wine Awards as well as 90 points from Wine & Spirits Magazine.

As Dave points out, “Grown at high altitudes (averaging 800 meters above sea level) [Altos de Aranda] combines a laser focus with impressive depth and freshness. Look for the savory tobacco leaf and blueberry notes typical of Tempranillo, with a spicy edge on the finish from spending a year in French and American oak barrels. Pair this with heartier, rib-sticking foods.”

The wine is imported into the USA by Artisans and Vines and can be found in the following retail outlets: