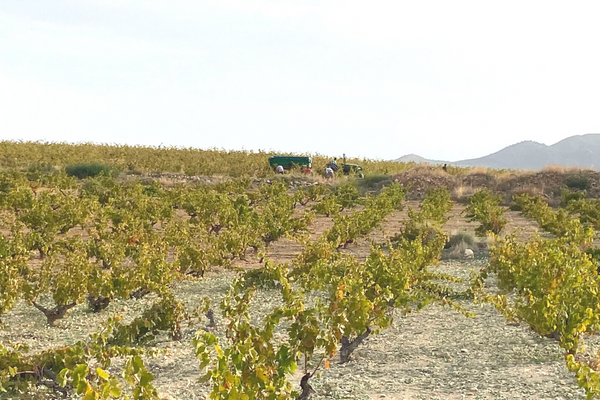 An early start and finish for Spain’s 2022 harvest

Despite being in mid-October, here in Madrid, temperatures are still well into the twenties, but it’s a far cry from the extreme heat we experienced this summer. The record temperatures meant harvest started earlier than ever, as we reported in our first harvest report.

Vine cycles in almost all of Spain’s wine regions ran around two weeks ahead of the usual dates and whereas most areas would still be harvesting on Spain’s national day, the 12th October, this year almost all had finished.

Rioja was one such area, with the official finish to the harvest on the 9th October, with a provisional total of just over 409 million kilos, of which around 12% is white. Final figures are expected to be just below those of 2021 and above those of 2020, with 401 million kilos harvested. The vintage was described as very complicated and varied greatly according to the area as some grapes ripened earlier whereas others – particularly dry-farmed white grapes – struggled to reach the desired potential alcohol due to the intense heat leading them to lose their leaves.  One of our contacts has said they are expecting total production to be 5% down on last year, which was a record year, and the health of the grapes is very good.

Although yet to finish completely, on the 10th October, DO Ribera del Duero reported that a total of 102.3 million kilos of grapes had been picked with only 28% of wineries still to finish harvesting. The total production is expected to be similar to that of 2021, with 109.9 million kilos, around 12% less than that of 2020, which was a fairly large harvest.

Quality is generally looking good for red wines, with small berries due to the lack of rainfall, leading to concentrated, full flavoured wines, although the high sugar levels go hand-in-hand with lower acidity.

The harvest finished around the 5th October 2022 with a total of almost 20 million hl of wine and must, around 10% less than last year, which was also slightly down on the five year average. Despite this reduction, which was due to the very low rainfall and extreme heat between June and August, the current stocks in Italy and France mean that there is not expected to be much movement in pricing. The quality of the grapes is challenging and the sector is calling for only the grapes with the best balance between sugar and acidity to be made into wine, with the rest of the under-ripe or over-ripe berries to be used for the production of grape juice, as there is a demand for juice across Europe after spring frosts affected other fruit crops.

William Long visited Viña Elena in Northern Jumilla during the first week of October. The winery was just finishing harvest, after starting in August with Garnacha. The production was 30% down on last year, but dates were in line with the average even though summer temperatures started as early as May.

The young vines on trellises suffered in the heat and drought but the old bush Monastrell vines gave very good fruit, with the large diurnal range with fresher nights helping them ripen in a balanced way.

One of the big issues this year was controlling the grapevine moth, which had five life cycles rather than three. In line with their sustainable philosophy Viña Elena uses pheromones to prevent the moths from mating, rather than any chemical insecticides. The winery also struggled to find workers to pick the grapes – an ongoing problem.

The earlier picking reflects the style of wines produced in Jumilla now. Ten years ago the grapes were picked later for increased ripeness and then aged in oak, whereas now the focus is more on work in the vines and picking early for freshness, with a lower intervention style of winemaking.

Further south, wine producers in Jerez are despairing about the lack of wine and the very high alcohol levels that will make it harder to produce the lighter Fino and Manzanilla styles. This year was the earliest ever recorded for the historic region, starting on the 28th July.

Final harvest figures from Cataluña have not been published but the harvest was also early – starting at the end of July – and the expectation is that they will be down 25% on last year, due to both the drought and problems with wild boar and other animals eating the grapes.

In DO Terra Alta, where we source our new Melea Organic Single Estate wine, around 3,000 hectares of vines were damaged by very heavy rainfall in early July. Around 80 litres of precipitation fell in half an hour, some as hail, leading to losses of up to 90% of the grapes in certain parcels, although thankfully our supplier’s vines were not affected.

In DO Rías Baixas in Galicia, rain in September made it a staggered vintage, but the harvest was finished by the 4th October, with 40 million kilos, making it the third largest in history, just below the figures reached in 2021 and 2017. This is good news for a region where demand outstrips production and the price of a kilo of grapes has gone above 3€.

Marta Castro-Pintos, winemaker and owner of Lagar de Pintos, which supplies Long Wines with its Casa Natal Albariño, is happy with the quality of the vintage, highlighting the excellent health of the grapes: “It’s true that we were a bit worried when rain fell at the start of the harvest, but in the end it played in our favour, as it washed the grapes and made them grow in size. And if we picked less than it previous years it’s because there was less at the budding stage, not because we lost any, as there was no frosts or diseases as in previous years. There were some vines that suffered due to the drought as we have sandy soils that don’t retain water, but in general, the summer conditions made it fairly easy to manage. It’s a great vintage.”