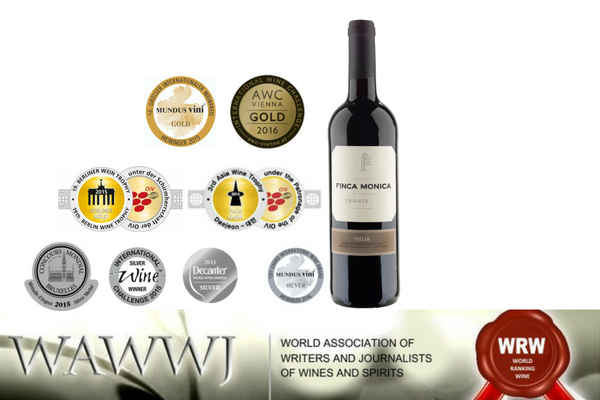 Finca Monica Rioja Crianza 2012 has been named the 25th best Tempranillo in the world according to the WAWWJ 2016 ranking. The annual listing by the World Association of Wine Writers and Journalists ranks wines and wineries according to the awards they have won in the world’s most prestigious wine competitions.

This impressive result reflects the huge number of medals won by Finca Mónica Crianza 2012 in 2015 competitions, including three Golds in the Berliner Wein Trophy 2015, Mundus Vini 2015 and Asia Wine Trophy 2015; as well as Silvers in Concours Mondial Bruxelles 2015 and the IWC 2015, and a Bronze in Decanter 2015.

The winery itself was the 4th most awarded winery in Spain in the WAWWJ 2016 ranking.  Founded by six winegrowing families in Alfaro in Rioja in the 1980s, its shares the Long Wines philosophy in terms of its commitment to offering exceptional value-for-money, using only the best raw materials.

The Finca Mónica range is named after Mónica Sánchez, the widow of a local grower, who continues to keep an immaculate patch of vineyard.

This year has also seen the brand fare very well in international competitions with Finca Mónica Crianza 2013 winning Gold in the AWC Vienna 2016 and Silver in Mundus Vini 2016, and Finca Monica Tempranillo 2015 winning a Gold in the Berliner Wein Trophy 2016.