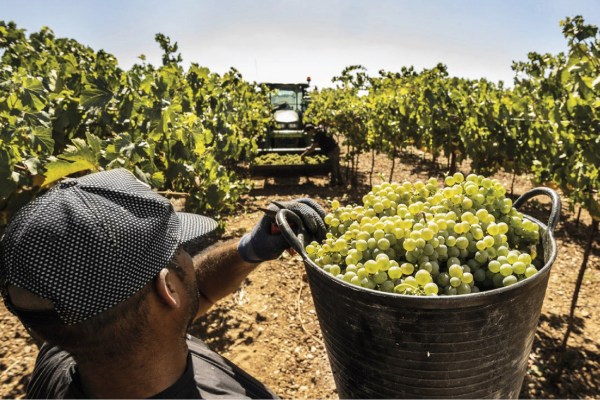 As we have already reported, 2020 was a tough year for everyone, including Spanish winemakers, as many areas were hit by for mildew, and a warm spring led to an early harvest.

However, the final balance is a production of just over 43 million hl, around 15% larger than last year, mainly due to Europe’s largest area under vine – Castilla La Mancha – bringing in 23 million Mhl – considerably more than the 2019 harvest, which was unusually small.

Despite these positive figures, some areas, such as Cataluña – which has a large proportion of organic vineyards – were very badly affected by mildew and production was down 35% on last year.

Despite the Consejo limiting yields to 90% in an attempt to stabilise prices in a year that has seen demand plummet in Spain’s all-important on-trade, Rioja’s harvest was slightly larger (+4,5%) than last year’s, which was also a tough year for the region.

Mildew and hail affected various parts of the region, affecting yields, and quality has been reduced in some areas which saw heavy rainfall, especially when growers picked earlier, those who held on saw more balanced alcohol and ripeness as winds dried out the rain.

These problems were not such an issue for our partner winemaker Gorka Etxebarria, as the Rioja Oriental is the driest area of the sub-region so mildew had little effect.

In terms of quality, Gorka explained in our earlier report that, “there is a great vintage in the making in the tanks. As we draw off the wines we see great clarity of juice and impressive aromatic intensity, plenty of colour and smoothness on the palate. The only thing that some wines perhaps lack is freshness, so we will have to carefully select the wines that go into barrels for longer ageing, but the average quality is very good so we can be sure that the wines will be exceptional.“

Although harvest was earlier than usual, the cycle was actually longer as budding was brought forward by warm temperatures in February. Alcohol levels were lower than usual and acidity higher, but this is no bad thing in a region where Garnacha can reach 15% potential alcohol in warmer years.

Frontonio’s Fernando Mora MW – who seeks to make a fresher style of Garnacha – is certainly excited about the quality of the wines from high altitude parcels that they have in vat.

Production of must/wine is way down on previous vintages – 35% less than last year, with 2.12M HL as the Consejo reduced yields to try to increase grape prices to above €0,50/kg.

In terms of the vintage, Eva Plazas, from the winery that supplies our Toca Cava brand commented, “2020 is the year that we have all been affected by micro-organisms: people by COVID-19 and the vines by mildew. “ She explained that the latter particularly affected the Macabeu and Garnacha, reducing the amount of grapes harvested. It was also a particularly early vintage, “ The 2020 vintage has been very early, fast and short: it was early for the native varietals and very fast due to the hot summer, especially at night when the temperature didn’t cool down. […] This meant that maturation was rapid and the harvest started very early. “

All of the fruit from this winery is now certified as organic and suitable for vegans, we will be updating our brands in line with these developments.

It was not until the 3rd November that the DO issued its final harvest report, on the third largest production ever, 123 million kilos of grapes, considerably more than earlier estimates.

Work in the vineyards was complicated by a very rainy spring, with more than 600mm of rainfall falling over the year. Viticulturalists had to work hard on green pruning and vegetation control to limit any disease.

It was a particularly long harvest as picking stopped due to heavy rain at the end of September. Although there were concerns that this could lead to rot issues, fortunately the rain was accompanied by strong winds that helped dry off the fruit.

The winemaker at our partner winery in Aranda de Duero that produces our new Altos de Aranda brand comments: “this year we saw average temperatures run between 1 and 3ºC higher than historic averages, which led to early budbreak, with flowering also running around a week earlier than usual, and there was little or no spring frost. Rainfall was higher than average, particularly during April. In terms of the wines, the data received from the Regulatory Council reveals pH values in line with the averages, but higher malic acid levels than in 2019, helping make more stable wines that are suitable for longer ageing. The sugar levels were in line with previous vintage and colour indexes were higher. These factors indicate that this will be an excellent vintage, in line with 2019, 2014 and 2009.”

Europe’s largest vine-growing region finished harvesting around mid-October with a production of 23 million hectolitres, reduced by outbreaks of mildew and yellow spider mite in some areas, although still in line with normal figures and slightly larger than 2019’s particularly small vintage, which was affected by frost and drought.

Quality is described as excellent and some have spoken of the “best vintage of the past ten years.”

It was manpower rather than the weather that presented the greatest challenge, pickers were in short supply and in some areas, such as Cuidad Real, vine growers complained that the prices did not even cover costs.

The area saw a harvest of 60.3 million kg of grapes, roughly 5% less than 2019. Rías Baixas accounted for more than half of the volume, with Albariño leading the way in terms of varieties.

Our supplier in the region said that their winery in DO Rías Baixas saw one of its fastest harvests ever, harvesting 5.2 million kg in two weeks from the 16th to 28th September – also earlier than usual. They picked 12% more Albariño grapes than the previous vintage. The weather was good, and the grapes are in a good condition for producing high quality wines.

Although mildew was an issue, the area is more used to heavy rainfall, with the pergola system helping to improve air flow around the grapes and production was not as affected.