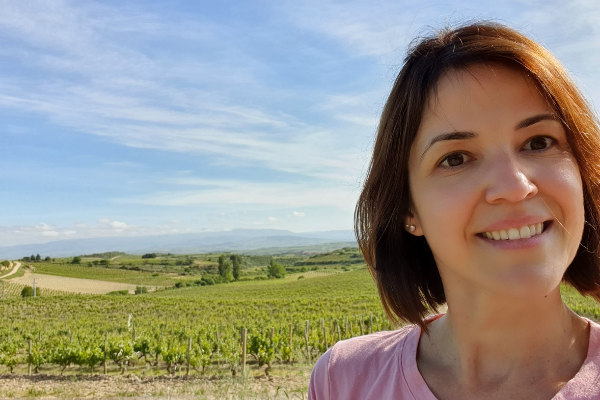 Meet the winner of the Finca Mónica WSET2 scholarship

As you may have read in our previous posts Finca Mónica is keen to encourage more young women to enter the wine industry and so is sponsoring a WSET2 course with Vintage Class for one young woman based in Spain who is starting her career in wine.

We had several strong entries in this, the inaugural edition, and we are pleased to announce that the winner is Ana Benés Olagaray.

Ana is from Logroño, Rioja and says that she knew from a very early age that she wanted to dedicate herself to wine. Her maternal family owns some vines in Navarrete, and she has helped with harvest on several occasions.

Ana studied economics, marketing and business administration, finishing her studies in London. She has worked in several market research and business development roles and in 2019, she decided to associate herself with her friend, winemaker Carlos Mendoza to form a new business. Their winemaking project – GR99 Viñedos de Paso – saw the light in May 2020, during the Covid lockdown. They have launched one wine called GR99 Primera Impresión, a Tempranillo from 35 year-old vines in San Vicente de la Sonsierra.

Ana is in charge of the marketing, business and administration but has also been honing her wine tasting skills at a women’s wine tasting group. She would like to do the course, as she believes it would help her gain a wider knowledge of the world of wine on a global level.

Ana says that she thinks it is important that the work of women in wine is recognised as in the past the sector has been associated with men. “If we take the Rioja Regulatory Council as an example,” she explains, “Only 3 of the 32 people that make it up are women. I believe this figure can be extrapolated across the sector. We need to be given a voice, be recognised and for our work to be valued. Although you do hear of women who have achieved great things, there is still a lot to be done.”