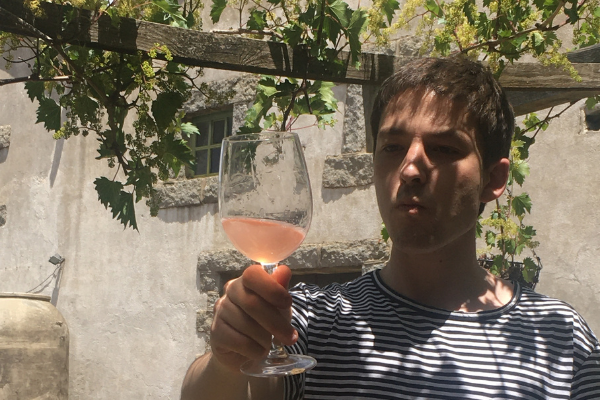 As William’s son, Freddie grew up in Spain and has visited wineries since he was tiny. Completely bilingual, he studied International Relations at Sussex and worked in the international music industry before joining Long Wines, where he develops business in key markets and brings his creative flair to new product launches. We interviewed him to find out more about what makes him tick.

Freddie, you have been heavily involved with the creation of the Melea Organic range. What is it that you love about the brand?

I enjoyed working on the Melea brand for many reasons, I particularly enjoyed the research behind it, trying to understand the consumer demand for organic wines and researching the competition.

It was interesting how the brand creation process developed and how, in the end, my mother’s artwork  really suited the brand concept. I feel we have developed something which is in line with current trends, it’s a win-win-win concept and has been very well received so far by our clients and consumers.

To people selling the wines, the fact that we are raising donations to protect bee species increases the motivation. In some markets such as in Eastern Europe there isn’t a huge demand yet for organic wines, but even in those markets we have received interest just because of the label design and the story behind the brand.

What about the sales side of your role, what do you most enjoy?

I enjoy working with all kinds of people, from all corners of the world from Japan, China to the USA, I enjoy doing my best to adapt my communications to each market and to understand each culture and the consumers in each market.

How do you find it being part of a family business? Is it hard to have a boss who is also your father?

It’s a change from working for any other company, when I first started working here I thought it could be quite complicated and I was a little scared to mix work and family. Whilst there are challenges and disagreements like in any company, I feel that so far it has gone well, I have come to find that it has it downsides but also its upsides. Being part of the family brings more responsibility and pressure, but as a positive I also feel that there is a better degree of commitment and support compared to working for a company without family ties.

What has it been like growing up in Spain with British parents? Do you feel more Spanish or British, or both?

It has been interesting, I have always spoken English with my parents, but with my brother and my friends I mostly speak Spanish. I have always been switching from one language to the other.

As a result, I don’t feel as though I have a fixed national identity. For an example I very much prefer Spain as a place to live, I love the people here and the lifestyle. However, I do miss my family in the UK and I always feel at home there. A lot of my earliest memories come from Manchester where I was born, and I often think about them.

Which Spanish winemakers do you most admire?

We’re lucky to work with one of them, who would have to be Fernando Mora MW.

I also had the pleasure to meet Juanan recently from Rico Nuevo Viticultores who can join my list of favourite winemakers, I found his project in Gredos fascinating.

What’s your favourite recipe and do you have a favourite wine to pair it with?

That’s a difficult one, but one of my favourite would be barbecued tuna belly or ‘ventresca’ as it’s called in Spain. It has a great taste and amazing texture. It’s also a great product to use in Japanese cuisine. I haven’t actually tried it, but I could imagine it would pair very well with a Sherry, maybe a manzanilla or amontillado, and I know that it goes well with a rosé or lighter style Garnacha, such as Melea Rosado or one of Bodegas Frontonio’s Garnachas.

Where’s your favourite place to spend your holidays?

I like to try different places so I don’t have one favourite place, I like exploring Spain most as it has so much to offer without the need to take a flight. There are a lot of places I still need to explore, but I love Cantabria and the north of Spain that the Camino de Santiago goes through. I also very much like Andalucia, which is almost a small country itself.

I also don’t have a favourite type of music, but I’m going through a flamenco phase at the moment. One of my best memories as a child was watching Tomatito play in 2001 at the Conde Duque in Madrid, it was a magical experience. Just thinking about it still gives me goosebumps of excitement.

In my spare time I like playing around with my piano and also playing tennis.