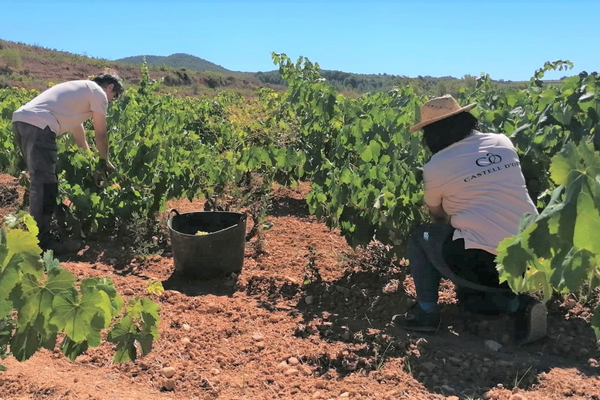 There is really only one word for it: extreme. All over Europe (and in much of the Northern Hemisphere) the summer of 2022 has been extremely hot and dry.   Spain hit a new historic maximum of 47.6ºC in Cordoba and, of course, this has had a major effect on vines. For years, we have been seeing harvests creep slowly forwards and this year grapes are ripening around two weeks ahead of the usual dates.

Harvest kicked off as early as the 27th July in parts of Cataluña, and the sherry region also has seen its earliest ever harvest, beginning on the 28th July. The same was true for DO Rueda, where some wineries were picking Sauvignon Blanc grapes as early as 16th August. In the eastern vineyards of Rioja Oriental picking started on 10th August, some two weeks earlier than usual, although it won’t be until mid September that harvesting is widespread across the whole region’s vineyards.

The generalized drought – less than a quarter of the average rainfall – means that overall yields will be lower. Castilla La Mancha, for example, is predicting a total harvest of around 19.5 million hl, about 15% less than last year (which was already a smaller vintage than average) and around 33% down on two years ago. This will obviously have an inflationary effect on prices, which are already high for whites and rising for reds due to the widespread increases in fuel and dry goods costs. Wineries still have some stocks from 2021, but these are fast depleting.

But it’s not all bad news. In terms of quality, the picture is much more positive. The lack of rainfall means that fungal disease is practically non-existent and small berry sizes mean that the skin to juice ratio is high, leading to intensely-flavoured and highly-coloured wines. By picking earlier than usual, winemakers can ensure that the acidity is in balance with the sugars in the grapes, retaining freshness and more moderate alcohol levels in the wines.

The news from the DO Cava is particularly up-beat. Our Cava partner winery Castell D’Or – producers of our De Pró Cava brand – started picking during the week of the 16th August. CEO Jordi Amell, comments:

“This year has been marked by very high temperatures and a lack of rainfall which has lead to the early harvest. Fortunately, we are expecting excellent quality in the grapes, with the ideal level of acidity and sugar to produce good quality wines and cavas, with a high level of concentration and clean, fresh aromas. The vine growers have worked very hard to protect the fruit, and to deliver the highest possible quality of grapes to the winery.”

We continue to wilt here in Madrid but we’ll keep you updated as the vintage gets further underway.