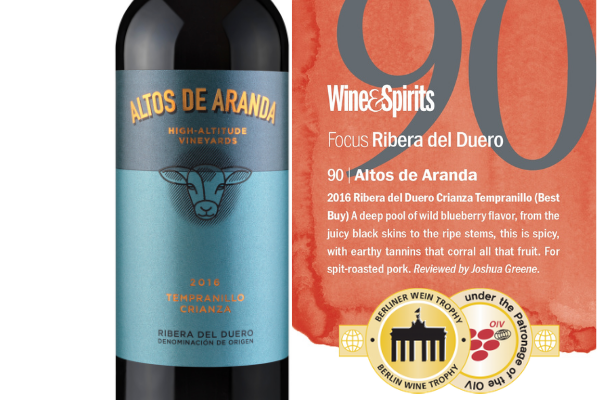 It may have only been launched last year but Altos de Aranda from DO Ribera del Duero is already garnering a host of accolades. Altos de Aranda Crianza 2016 has just been awarded a gold medal in the Berliner Wein Trophy 2021, as well as 90 points and “Best Buy” status in Wine & Spirits Magazine, aside from the gold medal in the America Wine Awards that it was granted earlier this year.

The prestigious North American wine magazine, Wine & Spirits, tasted the 2016 Crianza in their Ribera del Duero focus, awarding it a score of 90 points and a Best Buy recommendation. Taster and editor Joshua Greene described it as showing: “A deep pool of wild blueberry flavor, from the juicy black skins to the ripe stems, this is spicy, with earthy tannins that corral all that fruit. For spit-roasted pork.”

Altos de Aranda is sourced from high altitude vines (800m+) in the DO Ribera del Duero and is aged for a year in French and American oak barrels and at least another year in bottle before being released when it is perfectly rounded and enjoyable to drink. As well as with pork, we recommend serving it with the local dish of slow cooked milk-fed lamb.

For more information and samples please contact us here.